It’s 2:30 am, pacing on the terrace:
I see me ricochet against the edge
of an open window on the fourth floor.
I feel a strange numbness: a speck of ash
scatters, the end left to fall:
tumble and swing in mid air.
There’s no spark as the stub hits the ground.
I begin each day at 7:00 am
somewhere near the spot
where the stub hit the ground. 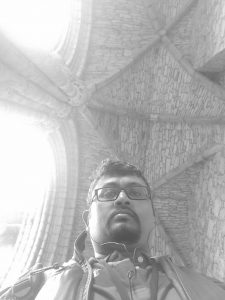 Debashish is a machine learning scientist, who has been published in literary magazines several times across the globe, including Poetry Life & Times, where he was interviewed twice. He is currently contending with a severe writer’s block spanning a decade, when he has hardly produced any publishable content. He is also losing emotional connection with his own work gradually, and spends more time to edit/tighten his old poems than creating any new content. Editors Note: Debashish Haar was interviewed twice in the old Poetry Life and Times, once by Sarah Russell then Editor & later by myself as a new Editor before it folded in 2008. The New Poetry Life & Times restarted in 2013 at Artvilla.com site, Admin David Jackson.

Excerpt from
Life and Opinions of Doctor BOP

A poem is a posit, an assertion, an act,
and in action we forget fear: respite
in creation, the maker takes a stand, in making,
but is it a stand no better than gimmick-makers make?
Well, poetry possesses the virtue of being a record,
at least, and you can date a poem, if you wish,
thus giving it the merit of a worldly fact
contained in a system of time, which, admittedly,
is a system which is perhaps pseudo-fact itself,
or will become so as matter completes its withdrawal
upon itself to revisit its beginnings in a black hole in space;
and yet, until then, something like a fact,
a fact in the sense that Sherlock Holmes is almost real
and lives in Baker Street in a fictional series
in a real world that may exist only in a dream
that is being dreamed elsewhere, perhaps—dare I say—
by Yahweh; and so poetry becomes an actual little stab
and, poets hope, rip in the black sheet
that covers the deserted, haunted mansion.

Amazon.co.uk Life and Opinions of Doctor BOP the Burnt-Out-Prof and Other Poems . See also Amazon.com


Many poets often turn to playwrites, more so than the other way about, and undoubtedly, imo, EM Schorb’s early background in theater has led to his latest theme in poetics “Life and Opinions of Doctor BOP ( the Burnt – Out – Prof and other Poems)”. In fact, it seems to me, the entire text hovers between sketches, vignettes, and biographic autobiographical narration in the first person. As a European, but one who has followed, as well, with keen interest North Amercan academia in poetics. As much as philosophy, related to cosomology and evolutionary concerns in the new sciences. It comes as an edifying experience to be introduced to the home grown frantics of North American Campus life, or insomuch, the affect it has had on our character in question, Doctor BOP. Actually, in the reading of the first part of this three part volume, a practically epic poem consisting of some seventeen pages, I was strangely reminded of the later short story writings of JD Salinger’s depiction of University life as an undergraduate English lecturer. He was in fact, as he describes himself, a rather reclusive English lecturer. And one of his passages springs vividly to mind, as he mentions in a more or less autobiographical narration, how as a now muchly graying and aging professor, he hastily makes himself scarce, the moment a group or anything like of under 40’s looms on his horizon, (on the Campus). A far cry from the days of Catcher in the Rye, perhaps we might encounter our Doctor BOP, as Schorb portrays him, as having travelled a somewhat similar way, perhaps a universal way of all burnt-out-profs. At least for the birth of our Doctor BOP, as he emerges from the Yiddish community, where due to a series of social phenomena peculiar to North American modern history, he finds himself born into the world of academia at midriff with his family’s origin, social background and status. Here Schorb brings his own background knowledge of Yiddish custom and vocabulary into full play in all its richness, in the first part of the central theme to the work. It is but one of the literary treats he devises. The whole text is replete with a classical apotheosis, religious epitomes, literary analogues and philosophical allusions, all of which abound in the head of Doctor BOP, as he makes his final but defiant bow before the world. The poems obviously are tragico/comico, there is satire, irony, bitterness, humour and kindness blended together with eruditeness. The text is littered with phrases in Latin, Greek, Yiddish, Spanish, we even have augenblick (in the blink of an eye, or in the moment) for Hamlet in German, and of course, Orator fit, poeta nascitur, poeta nascitur, non fit. (A speaker is made, a poet is born, not made). According to Doctor BOP, who quotes extensively from bibliographies of writers past and present and salutes us in the final part of the first part with vaya con Dios, my Darlings. Doctor BOP makes a delightful read, which the two latter parts of this small volume only serve to embed, and is well worth the buy, if only to raise the dust from our minds to reminisce over our studious years and the host of miscellenious trivia that is the heritage of our race in all its travail – a poor player who struts and frets his hour upon the stage and then is heard no more – to coin yet another allusion. 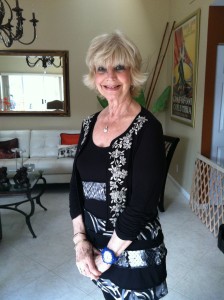 Judy started playing piano at the age of three, and studied at the Julliard School Of Music in New York City, her native city.
She became a jazz pianist and continues to play jazz. Now residing in Florida, she started writing poetry three years ago, and has been published in the Moonlight Dreamers Of The Yellow Haze anthology, Thepoetcommunity, Whispers in the wind, Indiana Voice Journal. Poetry runs deep in her veins along with Music.