A man wakes up,
climbs out of bed and
brushes his teeth.
He sees his face
in the mirror,
but in his mind
he’s already out there
stuck in morning traffic.

And while he sits
in the driver’s seat
and stares
at the taillights
ahead of him
on the freeway,
he’s already at the office.

And all day at the office,
as he squints into the glare
of his computer screen,
and glances at the clock,
while his fingers
tap at the keyboard,
he’s home on the couch,
television aglow,
glass of scotch in his hand.

Get through the day,
numb, forget,
and repeat.

There’s time yet,
for the real life
to begin…
maybe tomorrow.

Years,
whole lives
flow by
on rivers
of tomorrows.

Death comes for him
with a shrug and a sigh,
like a cat burglar
who got a bad tip
about a house
and was expecting
much,
much more. 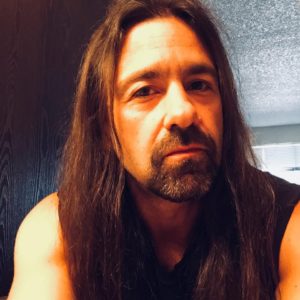 Brian Rihlmann was born in NJ, and currently lives in Reno, NV. He writes mostly semi autobiographical, confessional free verse. Folk poetry…for folks. He has been published in Constellate Magazine, Poppy Road Review, Cajun Mutt Press, The Rye Whiskey Review and has an upcoming piece in The American Journal Of Poetry

In absolute repose the aging child stands
Atop a landscape forbidden to his kin
Ethers hover, lost between lives.

The substance of what he may be, lost
Ghost of a self he may never encounter
Wandering in the midst of contradictory ecstasies.

Does he truly live in the cage of those bones
Is the pain in the fibers of this time
Perhaps consciousness has already fainted.

The valley slowly turns about his strange home
Assailed by the mockery of the piercing stars
Memories of centuries he never knew flash.

Contemplating the thickness of deep space above
Soon he will be devoured by the mystery below
Prisoner of eternities past and future.

Unable to anchor the languorous self he looses contact
He now knows the terror of measured eons
The reality of the death he can no longer recall.

Fabrice Poussin teaches French and English at Shorter University. Author of novels and poetry, his work has appeared in Kestrel, Symposium, The Chimes, and many other magazines. His photography has been published in The Front Porch Review, the San Pedro River Review as well as other publications.