one of Greta Thunberg,

another of Mad Max

that has no end:

of tin and oil

of guilt and sweat.

of Time that won’t be

The story ends when blood becomes so thin that it evaporates, forming clouds that would suffocate the melting mirage in the Monopolitan Globe.

Time to return home from Utter Space, and invent a better fable.

Brothers find purity in war.
In my safe house, hiding, I encounter a rabbit.
Together we watch the boys beat the bush-
muddled bees, flowers turned into petals,
fallen in fragments.
If you ask me what the fear smells like
I’ll say- small mammal, wasp and sting, Jasmine.
Sun traverses the field, nears the volcano of shadows, trees.
Clouds shape a bear, bear tundra, shower on my everything.
I turn. The rabbit’s gone. The rabbit’s gone. 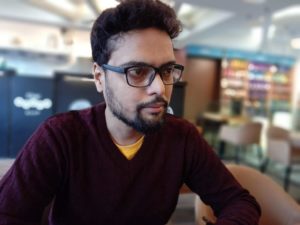