Finale was the first program I used to
compose music, in eighth grade, back
when my concern was to score colorful,
simple role-playing games I had created
with RPG Maker 2000. A couple years
later, I used new software, hunched
in the dark of my mom’s living
room, toying with FL Studio’s virtual
equalizers, knobs, and keyboard to craft
Schizotrope, the name of the album
I wrote to process a breakup,
an attempt to conjure you through
some combination of melody
and soundfont. When I listen
now, I hear us both a kind
of cacophonous ghost. Back
then, it was simple to slip on
cheap earbuds and recede into
my childhood bedroom, where we
did what I thought– when growing
up– was growing up. So shifted the
trajectory of my songs. And speaking
again of early sex, I sang off-key into my
coffee-stained Hewlett-Packard’s built-in
microphone, made a MIDI sound
marginally authentic to gift myself, in
the future, reverberations of my coping. 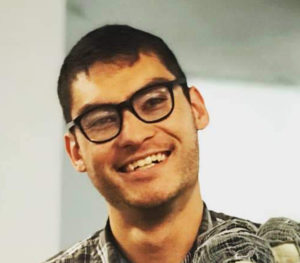 James Croal Jackson (he/him) has a chapbook, The Frayed Edge of Memory (Writing Knights Press, 2017), and poems in Pacifica, Reservoir, and Rattle. He edits The Mantle (themantlepoetry.com). Currently, he works in the film industry in Pittsburgh, PA. (jimjakk.com)