Flashing the dazzling light
Ah, the flashes of lightning
Interweaved over my head
I walked into a crystal corridor of the time

With smiles, he picked up the books of gold
Recited the sacred verses
I was intoxicated with miraculous wonderful words
Surrounded with the purple-gold flames all over his body

He told me a metaphysical epic
The sword came from nine billions years ago
Which, was made from hundreds of millions of suns
It was a sacred sword of the sun

The old man’s eyes were deep, archaic and abstruse
Dimly shone the joyful flames
He let me take this sword
To fly towards a new golden paradise

The wonderful space was gyrating leisurely
Like a huge, resplendent crystal
I said goodbye to the unusual city
Towards a space of golden light 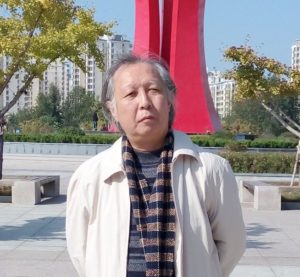 2.9.1998
Bio:Hongri Yuan, born in China in 1962, is a poet and philosopher interested particularly in creation. Representative works include Platinum City, The City of Gold , Golden Paradise , Gold Sun and Golden Giant. His poetry has been more widely published in the UK, USA ,India ,New Zealand, Canada and Nigeria.

Yuanbing Zhang,born in China in 1974, is a poet and translator, works in a middle school, interested particularly in researching and translating the works of Mr.Hongri Yuan. His poetry translations has been widely published in the UK, USA ,India ,New Zealand, Canada and Nigeria.