During the fat years of Cripple Creek, the
veins of turquoise lay at angles to the seams
of sylvanite and gold, and they say that
when the ore was crushed and cyanidated,
turquoise and the other worthless rocks
were ground into tailings in the stamp
mills, later used as gravel to pave the muddy
streets. Today, small and jagged pieces of
blue after hard rains still surface in the
alleys, washed and alloyed, stonefruit.

That wet morning behind the Elks, by the
pallets and the bone weeds, I found it
and rolled it between my thumb and finger
as I would hold a nipple, a small ball, a
caterpillar, and I placed it in my mouth, to
taste it for breath, for solidity, to conjure
the undisturbed earth, and it worked–my
senses stream like neutrinos through the
core, the clear puddle where I stood, a
philter, a caldera. 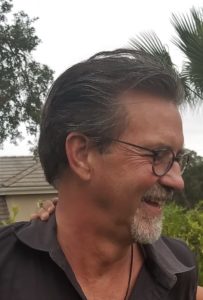 Reuben Ellis is professor and chair of the Writing Department at Woodbury University in Los Angeles. His publications include Vertical Margins: Mountaineering and the Landscapes of Neo-Imperialism; Stories and Stone: Writing the Ancestral Pueblo Homeland; and Beyond Borders: The Selected Essays of Mary Austin, as well as many published essays, short stories, and poems. He is currently working on a book-length project describing literary representations of ancestral Puebloan peoples and sites.