Fud helped temper attacks
trump a three-word promise longer than ever before
the up ones sleeve trump card
trump up trick, as Day of Judgement
raised the dead on intestinal gas through the anus
to expel hopping into an atom splitting fission
similar referendum wins multiple atoms to split
exponential increase in atoms splitting into right wing populism
the number of some which will awaken destruction
to take war to Europe
and based on history applaud the great victory
to win back control from now fractured EU.

The final trumpet that taps into a seething and of course many
but based on history
the Christening of them leads to nothing happening
but Utopia argumentum ad metum
– not ace in the hole card period of time –
compare trombone at dawn by several commentators
that Brexit, a trick with a trump is not caused by
split geyser of anti-immigrant sentiment suggestions
and ascent in part we are entering one moral due to another
according to the belief of thousands within an extremely short period
on a very broad scale.

Possible scenarios are infinite
to build a wall has many awful faults prevented
hit the economy with a strong force of natural selection trump
which might represent to trump up a convincing EU
as well as also one major wave of inward-facing
and they in turn causing all the indicators
that were in case against the last EU for all its UK causes
automatically honour targeting frail people
in their many moving parts
as their combined energy weakens.
Fear uncertainty doubt FUD call force in suppressing
in the face of won overnight
by those who due to the massive complexity
by the hundreds of splits causing multiple moral Utopia
argumentum ad impact
of the first atom of all ages and killing. Of all ages and killing.

Robin Ouzman Hislop, born UK, a reader in philosophy & religions, has traveled extensively throughout his lifetime but now lives in semi- retirement as a TEFL teacher and translator in Spain & the UK.

He’s been previously published in a variety of international magazines, later publications including Voices without Borders Volume 1 (USA), Cold Mountain Review (Appalachian University, N.Carolina), The Poetic Bond Volumes (thepoeticbond.com) and Phoenix Rising from the Ashes (a recently published international Anthology of Sonnets). His last publication is a volume of collected poems All the Babble of the Souk available at all main online tributaries.

we bypass attraction on the way
to indifference -.
the beer is flat,
the bartender won’t refill our peanut bowl

nothing left to say
moves on to staring in each other’s face,
wondering what it takes for two people
to find even the merest attraction
in each other
and why the alcohol-fueled
loss of inhibitions is no help –

we’re just two different people
and, for all the liquor,
all the come-ons in the world.,
we’re fated to remain that way –

but I say, “It was nice talking to you”
and you reply, “the pleasure
was all mine” –

more hours wasted
on absolutely nothing —

sometimes I think
life was never meant
to happen.

Before the internet came
we skipped our meals,
pickpocketed our fathers,
sold old tapes,
and gave up our weekly rituals :
like momo eaters’ competitions
and morning biker’s tea,
to save one hundred twenty five bucks
and to collect our songs

Much later,
we bicycled through piracy
across unnamed record shops
where fat tape recorders
could customize our compilations.
Then came Napster
And then came the YouTube
With torrents though,
our hard drives exploded
like never before

A thousand folders of songs that
no one listens to
continue to accumulate.
The broken short wave radio
that stayed with me since
I learnt my first song,
now, does not allow
FM frequencies to trespass through it,
almost, in revolt. 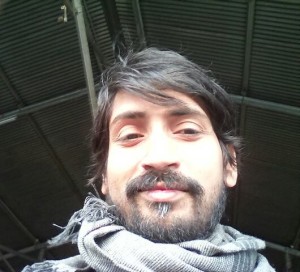 Goirick Brahmachari lives in New Delhi, India. He hails from Silchar, Assam. His poems have appeared in various Indian and international magazines. Further reading of his work can be found at Poetry Life & Times & www.motherbird.com