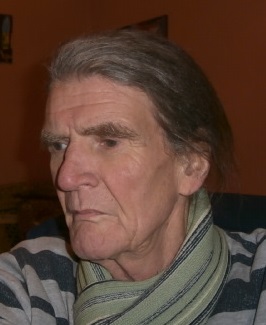 Is the plot,
at my window with a broken wing.

Time unreal,
to the last syllable of recorded time.

That is the question,
to quantum or not to quantum, mind.

Race against extinction,
a computer brain outside time without extension.

Before the apocalypse,
a history of births and deaths and trinkets of fame.

To mimic or simulate,
A multiverse machine, the name of the game, bring it on.

Time real, Newton and Einstein
out of sync, motion observed from a position of rest.

Onto an indeterminate future,
Consciousness, particle physics, the genome and time real.

End game is the name of the game,
space quartered in the loop of quantum gravity.

Time real,
at my window with a broken wing.


Robin Ouzman Hislop Editor of the 12 year running on line monthly poetry journal Poetry Life & Times. (See also its Wikipedia entry at Poetry Life and Times). He has made many appearances over the last years in the quarterly journals Canadian Zen Haiku, including In the Spotlight Winter 2010 & Sonnetto Poesia. Previously published in international magazines, his recent publications include Voices without Borders Volume 1 (USA), Cold Mountain Review, Appalachian University N Carolina, Post Hoc installed at Bank Street Arts Centre, Sheffield (UK), Uroborus Journal, 2011-2012 (Sheffield, UK), The Poetic Bond II & 111, available at The Poetic Bond and Phoenix Rising from the Ashes a recently published Anthology of Sonnets: Phoenix Rising from the Ashes. He has recently completed a volume of poetry, The World at Large, for future publication. He is currently resident in Spain engaged in poetry translation projects.