My mother used to say it
When I was growing up
But I never really understood it
Until I was, say, about thirteen
Or so.
And what she used to say was
“I hate liars,
A liar and a thief are the same.”
Like I say, it sounded good
Though I didn’t really understand it
For years,
That a liar and a thief are the same
Because they both steal something from you.
How true, and I try to live it
Even though it puts me
At a disadvantage. 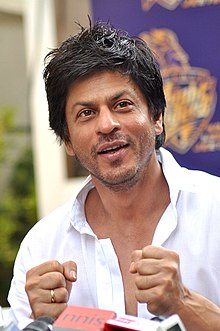 Those who have Netflix may already know about Shah Rukh Khan from these movies.  I came in with  Rab Ne Bana Di Jodi If you happen to wander upon this page and you want something special, then maybe you haven’t watched a movie from India. Sub-titles are worth the effort!
The films from India are jubilant celebrations of life and love. As Shahruhk says, the family in India is still together in one house and the movies are a conglomeration, a hodgepodge, a celebration of everything thrown in. They are apt to break into song or dance at any moment but with much more flare as the old Hollywood musicals. Think Paint your Wagon with modern music. It is the acceptance of modern pop music and a mixing of the modern with tradition with celebration. The new is mixed with the old not with conflict but with joy. This music sprang from the American culture and spread to the world. The conflict between the cultures of the world and Elvis continues and is evident in these films but they accept it.
We break into song and dance all the time, in the shower, as we work, it is natural and that’s the way it happens in these movies. Have we become too serious? It is refreshing to see art as joy.
Shah Rukh Khan came to Yale on April 12, 2012 as a Chubb Fellow in his first visit to an American university. The Chubb Fellowship is one of Yale’s most distinguished honors.
The speech is wonderful. The interviews afterward are so special. Do not miss the opportunity to watch this Yale video. It is the special part of this day.

From Wiki:
Often referred to in the media as””Baadshah of Bollywood””, “King Khan” and “The King of Bollywood”, Khan has acted in over 70 Hindi films in genres ranging from romantic dramas to action thrillers.[5][6][7] His contributions to the film industry have garnered him numerous achievements including fourteen Filmfare Awards from thirty nominations. His eight Filmfare Best Actor Award wins make him the most awarded Bollywood actor of all time in that category, tied only with Dilip Kumar. In 2005, the Government of India honoured him with the Padma Shri for his contributions towards Indian cinema.

I knew that Silicon is good for plant metabolism,
which should make me be happy as a vegetarian
and a woman with I don’t know how many plants
potted and taking over my home.
But Silicon is barely ever needed for animal life…
In nature, Silicon seems to be better suited
for sea sponges. And although I love the sea,
the last thing I want to be called is a sponge.
And you know, if Silicon is used by anyone in the
animal kingdom, you can believe that I really dislike
breast implants made out of Silicon (or made out of
anything unnatural to the human body, for that latter).
And after my Lasik eye surgery, I even heard
they use Silicon for some contact lenses —
which makes me glad I don’t need contacts anymore.

So if Silicon doesn’t have a use organically for humans,
I guess it makes sense then that Silicon is actually
used by humans in explosives and pyroptechnics.
But really, for the abundant element, Silicon
has to have some better uses for us humans,
like in semiconductors, or even intregrated circuits…

But whenever I go out and walk on the beach,
feel the sand work it’s way between my toes,
I should remember that Silicon Dioxide
is pretty much sand.

Then again, I heard that people were suing Taco Bell
a few years back, because their “Taco Meat Filling”,
was only one third meat, plus flavorings, and a bit of
Silicon Dioxide.

So yeah, people wondered, and were asking
if Taco Bell “meat” was actually made with sand.

I know, I know, Taco Bell had to explain that Silica —
or Silicon Dioxide — is commonly used for foods,
and Taco Bell was just using the harmless oxide
to absorb water and keep the meat from clumping.

Hmmm… So if Silicon is common enough
to be under our feet on beaches around the world,
and if this vegetarian should be pleased
that Silicon is used during plant metabolism,
then I guess I’ll have to expect us humans
to use Silicon (even if we don’t need it)
to help us see better with eye contacts,
or comically exaggerate our breast size,
or even use integrated circuits
to help set off some cool fireworks,
because Silicon has to be cooler
than just the beauty of the beach at sunset.