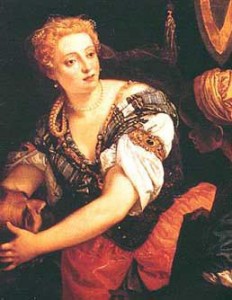 I followed Veronica to San Stae* where I spied on her,
a stalker me, glimpsing her veil from the back of the church**
as she danced, so I call the genuflections, bows,
forehead-to-navel and clavicle touches, as she sang,
so I call her responses and amens. I moved by twos and threes
until I sat across from her

– she looked once, smiled, and closed her eyes
in what could have been taken for prayer if not
for that ripple at the corner of her mouth –

Those are illegal, you know, I said to her once,
as a yellow day-egg rose above the rooftops, and she made
that arpeggio with her tongue that indexes merriment for her.
Nevertheless I stole them and, at the depth of my own wallet,
had an old craftsman in apron and shade study them
in a gemster’s glass, and scalpel a replica from cunning plastic.

Veronica, a cycle or so later, placed a finger under my chin
to tilt it.

You think I don’t know? she said. These are so much warmer,
and the prayers are heard when I thumb my way through the calendar,
because a deed of love comes with them.


* She knew;
I’d refused to come to mass, but dogged her from fascination,

obsession,
watching her pivot between shoulder and shoulder,

between hip and hip,
placing one foot after the other
with catwalk deliberation, with the rise and fall pavane
of a woman in a to-the-floor gown, studied to me
but natural

to all the blind men dazzled by her gold.


** A vecchia engaged me there, offered to take me forward to eat the wafer,

at the Man of Pity on the cross, it would touch my heart, as it did,