Having swum in the ocean of stars

calling them Gods—their campfires, their monumental

sorrows, our bliss at a faith-conceived heaven—

we are driven back by heavy gales.

a ruined fort in a dull brown landscape.

clefts of rock, greening, here and there,

otherwise barren soil. Onwards then, to a flat plain

of the modern. The monkey likes bananas.

flashes of lightning, the will to see

the infusoria: African sunsets, the question

of microbes, my lens, my imperfect vision.

And then another island—fertile, volcanic

red cinder hills, everything slopes toward the

interior. But I will paddle the rock pools

Having swum in the ocean of stars

we are driven back by heavy gales

It’s coming, the storm of the modern,

The air is ion charged. 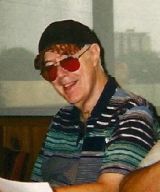 from a million, billion fireflies,

From the first small bonfire

whose light imprints itself

upon the canvas backdrop

of a feckless, barely cohesive Infinity,

the matter of man, no more than

the past, transmogrifies the future —

denies the import of “real” or “black”

or any other type of matter.

Yet existing, it defines the local locus

Of now and when and how and then.

The freezing cold of space

singing out the music of the spheres,

maestros of a trillion symphonies,

platelets in the lifeblood of the Universe.

upon a formless sandstorm,

a thought burns itself

into the very fabric

***
Jim Dunlap’s poetry has been published extensively in print and online in the United States, England, France, India, Australia, Switzerland and New Zealand. His work has appeared in over 90 publications, including Potpourri, Candelabrum, Mobius, Poems Niedernasse, and the Paris/Atlantic. He was the co-editor of Sonnetto Poesia and is currently a Content Admin for Poetry Life & Times. www.facebook.com/PoetryLifeTimes He is also the chief proofreader for the On Viewless Wings Anthologies, published out of Queensland, Australia. In the past, he was a resident poet on Poetry Life & Times and the newsletter editor for seven years with the Des Moines Area Writers’ Network.

You may find him here: