There is a grey area between
this world and the next.
People can be foolish; they dabble in ouija, in
dowsing, in automatic writing;
and – wittingly or unwittingly,
they may open a portal
to the other side.
That is how they enter.
Beware of inviting them in.

Shadow people are there
where needle pierces skin; where the junkie
sits, glassy-eyed, on the precipice of oblivion;
they lurk in unholy places where godless
politicians declare themselves to be
speaking for God;
they haunt the dreams of drunkards,
schizophrenics, junkies
and the paranoid.
But they are not spun out of dreams,
they are real.

Shadow people were there
when the ancient pharaohs of Egypt
were interred, with all their gold;
they took them to Hades
for also burying their wives
and servants, alive.
They were there
in Nazi concentration camps,
sitting on the left shoulders
of those who blindly carried out
orders of death and torture.

They subsist in underworlds of catacombs,
they lurk in the spaces between
our conscious and unconscious minds;
In blackened mirrors they seek out a vortex,
My friends, be the light that
keeps out the darkness,
Do not seek to question the dear and foregone,
No matter how much they are missed;
for there are others lurking in the shadows.
Be not the portal inviting them in.

Did I see you in Bohemian Grove,
smiling at the Cremation of the Care?
Were you there,
and did you have more than one shadow?

Did I see you in that Great Hall
with chequered floors,
where the Eye of Horus
watched over a pyramid of gold?

Did you lift a cup of
the good red wine,
did blood brothers drink each other’s health,
gazing through a glass darkly?

Did we toast the Cremation of the Care,
and how many others were there?

Sometimes we visit Hell in our dreams,
though we may fervently pray before sleep.
There is no shame in sleeping with the light on.
Wear a cross, if you think that it will help.

Sometimes the citizens of Hell visit us,
in that stasis between sleep and wakefulnes;
they are only ever seen at the outer periphery of our vision.
It’s never a good idea to look at them directly.

Sometimes they venture a little closer than the rules allow.
Sometimes the line between their domain and ours is blurred.
Occasionally, the breeze seems to whisper your name –
only, it’s not the breeze.

Be vigilant.
Always try to see them first.


From Wikipedia:
James Warren “Jim” Jones (May 13, 1931 – November 18, 1978) was an American religious leader and community organizer. Jones was the founder and leader of the Peoples Temple, best known for the mass murder-suicide in November 1978 of 909 of its members in Jonestown, Guyana,[1] the murder of five people at a nearby airstrip, including Congressman Leo Ryan, and the ordering of four additional Temple member deaths in Georgetown, the Guyanese capital. Nearly three-hundred children were murdered at Jonestown, almost all of them by cyanide poisoning.[2]Jones died from a gunshot wound to the head; it is suspected his death was a suicide 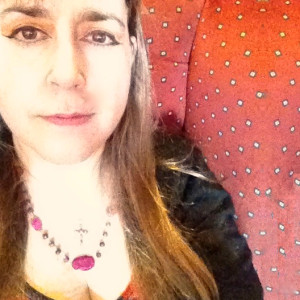 Sara Louise Russell, aka PinkyAndrexa, is a UK poet and poetry ezine editor, specialising particularly in sonnets, lyric-style poetry and occasionally writing in more modern styles. She founded Poetry Life & Times and edited it from 1998 to 2006, when she handed it over to Robin Ouzman Hislop and Amparo Arrospide; Robin now runs it as Editor from Poetry Life & Times. She is currently founder and Editor of the daily paper.li journal, Poetry Lifetimes ; which is a sister publication to Poetry Life & Times. Her poems and sonnets have been published in many paper and online publications including Sonnetto Poesia, Mindful of Poetry and Autumn Leaves a monthly Poetry ezine from the late Sondra Ball. Her sonnets also currently appear in the recently published anthology of sonnets Phoenix Rising from the Ashes. She is also one of the first poets ever to be published on multimedia CD ROMs, published by Kedco Studios Inc.; the first one being “Pinky’s Little Book of Shadows”, which was featured by the UK’s national newspaper The Daily Mirror, in October 1999. (Picture link for Mirror article) Angel Fire