Splash words across: images on canvas.
Before Abraham was, I am:
the cubist of poets. Mangled and tangled;
Here thoughts emerge, in reverent perspective.
How many, the dimensions? Monotone
in my unidimensions. Filter. Baritone.
Coffee-brown is the best colour around.

Here we sit by two-arms distance. To north,
to south. Facing opposing poles.
There is an attraction.

Here are images from the industrial world
gone post-industrial. Broken commodes.
Outsource your misery here. The sky can afford
a hole from on here. As long as
there’s none in my shoe.
Sometimes, I roll over in waves.
Sometimes, you wave over.
Questions still hidden in the corners.

All that’s passed remains flickering
green like the wireless router
silently at nights: recover, play it over.
Flush it all up. Splash it all around. Cubism.
Art nouveau. Portmanteau. Now fruck the world.
Neon shades rippling through the smoke,
laughter like that of an empty skull:
smoke the pipe, brother,
spread the peace around.  2013, stupid.
Idealism died in ‘67. And many times since.
Repeats always a farce.

Only one man died for the poor.
Who else called the dead to life?
All other stories are about barons and hedgehats:
while the millions were ground over
to oil the world. While they roiled the world.
How the poor die under the heels
of those that claim to love that man?

Yes, we can, brother, we can defeat this
corruption, bloody. Brother,
be not corrupt.

A sigh of disapproval, soft in sleep.
I come and lie, back to your back,
waiting for love to seep over.

Yes, we can, brother, we can overcome
bigotry vile. Brother,
say not, mine, the only way ever.

Happy lovers day. Shout out aloud,
peans more to the meek women’s rights.
Forget not, there’s some in your sights.

Two arms’ distance is about the right in the day.
There are two faces seen in this bubble,
formed at the mouth of the tube.

Peace to the world, every morning after.
Every little home by home. 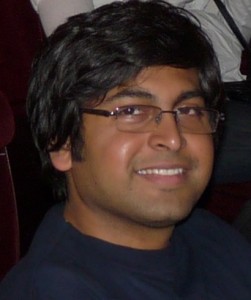 Educated in India and England, Prabhu Iyer writes contemporary rhythm poetry. He counts the classical Romantics and Mystics among his influences. Among modern poets Neruda and Tagore are his favourites for their haunting and inspirational lyrical verse. Prabhu has also explored the meaning of modern art movements such as surrealism and cubism and their role in anchoring the society through his art-poetry. Currently he is based out of Chennai, India, where he has a day job as an academic scientist.

In 2012 Prabhu collected over 50 of his poems and self-published them on Amazon Kindle: Ten Years of Moons and Mists More recently, his 2014 entry made it to the long list from among over 5000 entrants to the annual international poetry contest conducted by the UK-based publishing house, Erbacce Press. Some of Prabhu’s poems are at http://hellopoetry.com/-prabhu-iyer/ His major current projects include a further volume of poetry, his first fictional novella and a planned series of translations of lyrics from Indian film music.


Editor’s Note: for further information see Interview with Prabhu Iyer at this site