-Well, what kind of witch, is it then?

It is an indestructible witch, that one, who lives in a city at the end of the world, which must be nameless.

For the sake of its inhabitants who know her & those who don’t, for that’s how terrible this witch is. She lives at the end of a street in this city, which ends in a stair, which ends in the air.

Ay, a black thing, all crooked & twisted, a misshapen enormous runny thing, as inside out, as outside in & more like a shadow than a thing on the stair. In fact, it’s reported, those who followed her on the stair, like the little children…

-She fascinated them, I expect.

Those that returned, those she didn’t eat alive & leave their bones splattered all over the place, say when they crawled up the stair behind her, they couldn’t see whether she wasn’t some hideous shadow or some perfidious object before them.

So she, with a terrible screech, would leap out at them, all hooked & fanged, & kick like stilts with great clob- -bering boulders on the nearest to pulp, whilst the some she’d snatch & swallow in chunks spitting out their little bloody bits, as the others howled helpless screaming in the air, whilst her gruesome faces leered at each, licking their odious lips from where exhaled foul putrescent odour.

That’s the snag of it, they’d thought to hang a great net from under the stairs & over the pit, but what to do with her after! You see, it’s known she has a place of exit from the pit & from there crosses the city to the stairway but no one knows where it is.

-Is that so important?

If they could find the exit they could fill it with glue and stitch the lot of them so that they’d never so much as twitch a snitch again.

-Why even then she might just become gum & goo & cover everything.

The net it must be, we thought to attach it to a balloon & send her to hover under the highest stratosphere of the globe, but she may bust the biosphere & swallow us all in a black hole.

-Or again drop her into the sea & what unfathomable semblance may arise from its depths to walk upon the land.

Or volcano, she’d blow the earth to smithereens.

-Truly indestructible, but what to do ?

Placate her, you arch an eyebrow, it is indeed a heinous affair, the whole city given over to the production of children simply to feed her, the people are not so virile, whilst the whole process takes somewhat longer than farming piglets, it comes to the same thing.

& the children will carry pumpkins in procession, dressed up as little ghouls to see the witch at the bottom of the stairs.

-& tomorrow a bigger mess than usual.

It’s funny how they like human flesh, isn’t it, why can’t they be satisfied with insects or rotten fish, children at that!

-Put a curse on her to turn her to ashes & burn the ashes.

Our greatest bards have composed rhymes that would jinx any moving or still thing, “O most wicked bitch, may you hitch in stitch so that you never twitch a snitch, witch”

To no avail, she seems immune to words.

-We must find the exit.

But to enter by the exit is to be consumed by hell, there’s always an obstacle, she herself is nothing but an obstruction, we’re under forced development & we can’t block the exit.

-To close the pit forever would be a solution, you’d walk on top of it & never know there was a witch underneath raving with rage & wanting to rip you apart.

You’d go to the top of the stair & just jump into the air. 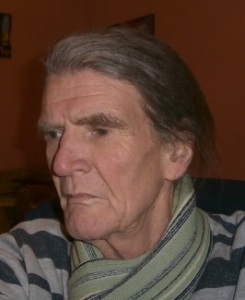 Robin Ouzman Hislop Editor of the 12 year running on line monthly poetry journal Poetry Life and Times. (See its Wikipedia entry at Poetry Life and Times). He has made many appearances over the last years in the quarterly journals Canadian Zen Haiku, including In the Spotlight Winter 2010 & Sonnetto Poesia. Previously published in international magazines, his recent publications include Voices without Borders Volume 1 (USA), Cold Mountain Review, Appalachian University N Carolina, Post Hoc installed at Bank Street Arts Centre, Sheffield (UK), Uroborus Journal, 2011-2012 (Sheffield, UK), The Poetic Bond II & 111, available at The Poetic Bond and Phoenix Rising from the Ashes a recently published Anthology of Sonnets: Phoenix Rising from the Ashes. He has recently completed a volume of poetry, The World at Large, for future publication. He is currently resident in Spain engaged in poetry translation projects.