You read Rilke on 15th Street,
oblivious to the traffic,
the disinterested passing by,
the text passing
from your passionate grasp
into the ice-gray grip
of the grim theorist,
full of dedication,
not like devotion
born in the hot bosom
of simplicity,
where poets lie
defenseless
without ideology.

I could not abide the contrast well,
the play of opposites
side by side on the sidewalk,
one muse held fast
between them.

With a pounding head,
I chose coffee in a plastic cup,
caffeine, and relief
from senses pulled apart
in hot Philadelphia sun.

He reads a thousand years
of suspecting truths
reads for angels
stripped of wings,
choking in the dust.

No, not angels…
Human, mortal, cursed…
Like a vision
on wings of wax,
beating relentlessly
against the wind,
striving to rise,
to leave cold ground
for warmth of the sun,
to see in the light
truth shadows distort.

And in the heat the poet
is brightly lit for a time,
until the thin seams of wax,
glue binding the act melts…
Feathers gleaned from birds
of all kinds and climes,
wings fashioned like a knife edge
slicing through time,
loose themselves from
the poet’s binding thoughts
to float slowly away,
each in its own direction.
The act ends turning one last
hope-filled look into blinding light
receding into the distance,
then freefalling,
spinning earthward.

That I could hold fast,
freeze the falling poet
one instant,
or embrace him once,
but he flies among clouds
I fear to approach.

“Wings” excerpt from a 2017 chapbook, “Pizza and
Chianti; The Philadelphia Poems.
https://www.facebook.com/philliphenrychristopher/ 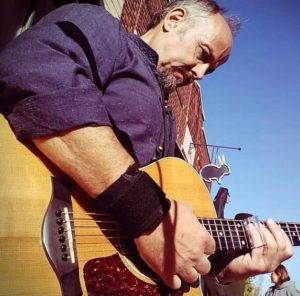 Poet, novelist and singer/songwriter Phillip Henry Christopher spent his early years in France, Germany and Greece. His nomadic family then took him to Mississippi, Georgia, Ohio and Vermont before settling in the steel mill town of Coatesville, Pennsylvania, where he grew up in the smokestack shadows of blue collar America.Escaping high school, he made Philadelphia his home, alternating between Philly and cities across America, living for a time in Buffalo, New Orleans, Fort Worth, even remote Fairfield, Iowa, before settling in Indianapolis. While wandering America he has placed poems and stories in publications across the country and in Europe and Asia, including such noteworthy journals as The Caribbean Writer, Gargoyle, Lullwater Review, Hazmat Review, Blue Collar Review, Haight Ashbury Literary Journal, Blind Man’s Rainbow and New York Quarterly