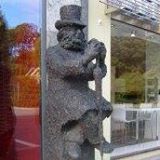 Back before he was extinct, I mean, of course,
The Great Common-Sense Woodpecker, bless his heart,
You could sit here on the porch, sober as a judge,
And watch pterodactyls chasing the bugs
Back and forth around the glowing moon.

Back then, that is, before it all went to hell,
That boy from Bacon County, what was his name?
His daddy drove a log truck, it finally caught fire
And burned down the Primitive Baptist Church,
But the pastor’s German Shepherd barked in time,
And they saved the parsonage. I’ll remember his name,
The boy’s, not the German Shepherd’s, here in a little,
But anyhow, he played the mandolin, not the dog,
Of course, but the kid from Bacon, pretty well,
And he’d park his butt on the steps and play old songs,
“Pretty Polly,” “Darlin’ Corey,” and “Watch Out, Young Ladies,”
And Grandmama, who did watch out pretty well
When she was young, according to her, anyhow,
Would tap her foot as if arthritis was a song.

And up in the sky, the constellations danced,
And passenger pigeons flowed across forever,
And old songs fused together like aqueducts,
Washing all the grief away that any of us ever had.