In the tattered parts of the hand woven fibres
naked poverty of screams
amid roaring drunk waves of wine bottles
whirling in synthesis with partying proverbs
echoes against posthumous walls
to add the colors to a faded terrain
sipping dripping sweats of a dead beat life
which has spent decades to get up from work
to smile at the gone days.

Foliage and twigs rejuvenate themselves
with the waters discarded out of the musical chair game
with splashing music dying out
in swimming strokes of fatigued hands.

Each day swimming fog blurs smiles
Crawling clouds dance with tears
and changing seasons paint poignant outbursts
yet the little life left in some corner
takes a swing in the estate
where a Rolls-Royce warms up each evening
and Rolexes add motion to stillness. 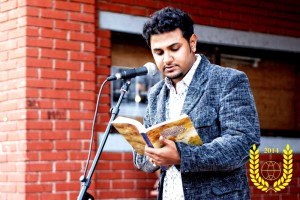 He is the Editor in Chief of The Enchanting Verses Literary Review and Editorial Board member of Multilingual Magazine Levure littéraire based in Paris, France.
Details of his works can be found at www.sonnetmondal.com