Editor’s note: the following are the the author’s notes – this poem is about the time I taught writing classes at a senior center in Scottsdale.The Life Story class was an extra for me, and I struggled to make sense of other people’s lives I think. Photograph (from a night reading outdoors at a gathering one summer in Idaho).

The war begins each Friday
after noon
when Joseph sits down and the bombs
fall again on Pearl Harbor.

I ask the class who they are writing for.
Susan has three children
and needs to tell them she feared
for her life at the hand
of their father.

Edna wants a record of the cold
for her grandchildren
and how she left it behind
in California.
Lorraine was a dancer;

she writes for herself.
Take it scene by scene, I say,
enter the minutes until
they are hours, then make days.

Dorothy is glamorous
in a lakeside camp
and the sunlight all around her
fills the page
until the edges burn.

I grew up in the rain
and it drained, leaving a gloss
on the pavements
and the trains I rode away on.

Describe the places
where you lived. Denise
builds red rock Utah on the table,
Edna spreads a prairie beside it
while I try to assemble
an England that used to exist
but I only have the pieces
of a single room
with a photograph of mountains on the wall.

Ernest recently returned
to his home town. No regrets,
there isn’t much left.
Make it live with the music
you heard back then, I say.

Ernest answers with:
There isn’t any music in my life.
I keep hearing one concerto
with a cello
playing the grief of the hills
as they recede.

Think about the future
in which your stories will be read.
Betty shakes her head;
her son does not want children
in an unjust world. Imagine how I feel,
she says, when the bible guides us
to be concerned for what is close
and to leave the distance
where it is, but the family
is ending with him.

And I, who value art over children
and poetry over scripture,
declare the lesson over. 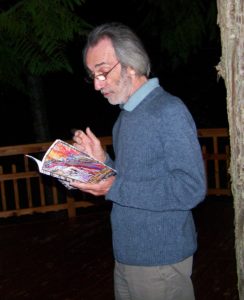 David Chorlton is a transplanted European, who has lived in Phoenix since 1978. His poems have appeared in many publications online and in print, and reflect his affection for the natural world, as well as occasional bewilderment at aspects of human behavior. His newest collection of poems is Bird on a Wire from Presa Press, and The Bitter Oleander Press published Shatter the Bell in my Ear, his translations of poems by Austrian poet Christine Lavant. http://www.davidchorlton.mysite.com