Dead poets wake in a tremendous castle,
all dark beams, fireplaces, stone stone stone.
Pop-era people flash on Middle-earth,
but older types (like Byron, deadly with boredom)
set them straight. They point out and explain
runes, the wolf and ouroboros
motifs, the giant scattered meadhorns
and outsized chairs – this is
Valhalla. Someone academic, peering
through a window-slit at a misty waste,
asks where the heroes are, who train by hacking
each other apart all day, then drink all night?
Not to mention the Valkyries …
And Coleridge, more than usually stoned,
laughs, Do you think someone would fight for us?
(At which Petőfi and D’Annunzio
frown.) But now the latest crop of dead
nag about dinner. Since most of the place is a freezer
and always full, they’re well-supplied
with venison and auroch, though Marianne Moore
says yet again she would kill for a salad.
Something possesses Ashbery, who tries
to pull an ornamental sword
from a wall, and collapses. Where –
someone asks inevitably – are the gods?
But not even the oldest inmate,
not Pound or the Beowulf-poet, knows
they are off forever trashing the Cabaret Voltaire. 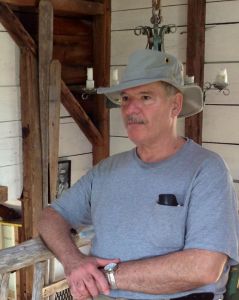