This isn’t boring.
You won’t be bored with the details —
anyone interested in different kinds of attraction
should listen close…

Because Bohrium isn’t boring
if you find fusion fascinating.
Think about it for a minute —
what are the conditions
that bring two bodies together
so they join to create something new?

Think back the the times of year
when you have met people you later dated.
Was it in the summertime,
when the temperature was high,
when you were feeling all hot and bothered
when you saw that special someone
that you were instantly attracted to?
Maybe you were taking a break from school
or going to the beach to relax,
make yourself look just perfect
for that one chance encounter
that will lead to so much more…
(Hate to tell you this,
but that hot weather attraction
is a lot like a hot fusion…
Chemically speaking, after atoms are split apart,
“fusion” is the art of getting different parts
to come together to create something new.
The sun’s a natural fusion reactor.
Nucear reactors perform fission to split atoms,
nuclear fusion, or “hot fusion” uses all it’s energy
to slam those elemental atoms into each other,
so they’re more likely to break apart
and their parts can create new elements or isotopes.
This is how scientists discover synthetic elements.)

But sometimes, sometimes, that attraction can come
not when the temperature is sizzling hot,
but when things seem bitter cold
and warm bodies have a tendency
to group together to conserve their heat.

I suppose you can say I     am “bonded” with someone now,
and when we met on a train commuting from work
it was the middle of January in a cold Chicago winter,
I was fully adorned in a winter coat, a hat,
gloves, a headband for my ears,
boots, a scarf covering my face.
Who knows, maybe that not-so-hot weather
gave us more of a reason to bond,
since it was only three months after we met
that we became engaged for marriage.

(And I hate to say this, but scientifically
there is a method of fusion for this as well.
Cold fusion is technically the fusion of things
merely at room temperature
and not after nuclear super-excitement.)

And as I said, I didn’t want to bore you with these details,
but there are a lot of ways fusion like that
can even help in the discovery of new elements,
like Bohrium.
Because back in eighty one, element one oh seven
was discovered after bombarding bismuth two of nine
with accelerated nuclei of chromium fifty four.
They only produced five atoms of Bohrium 262,
but man, were they excited…
They were so attracted to Niels Bohr
that they wanted to name their element
nielsbohrium for the Danish physicist.
But wait, Russian scientists originally
wanted to name element one of five nielsbohrium,
so the Germans here at one of seven said
hey, we wanted to give props to Neils Bohr
for his work in cold fusion (since that was used
for the discovery of this element).
So the Russians relented,
but the element naming commission
said, wait a minute, we’ve never
named an element after the full name of anyone,
so, after they temporarily called it unnilseptium
(Uns, Latin for one oh seven),
they settled for just the last name
and crowned this new gem Bohrium.

And yeah, there are tons of isotopes of Bohrium
from all that atom smashing and bonding
with half lives from a quarter millisecond
to ninety minutes,
but there aren’t many atoms of the stuff,
so all of it’s properties are only extrapolated
from knowing it’s place in the Periodic Table.
But still, know how fusing things together
is the only way to make this new element,
makes you put a whole new spin on bonding,
attachment, creating something new,
that almost puts a glimmer in your eye
and makes you smile again. 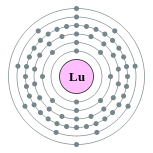