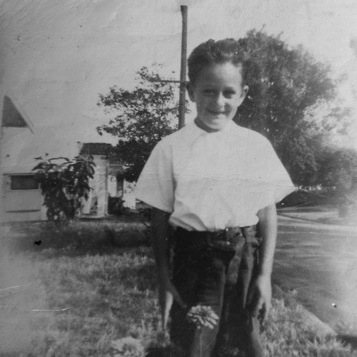 Dogs baying, howling. Men in a jeep.
Drinking beer. Pointing guns.
Shrubs cracking under wheels.
I’d seen them earlier today. Sitting in
their jeep. Shooting squirrels out of
trees. Blew ’em all apart. But I ran
till the forest was quiet.

Resting here beside a clump of dead
branches I hear dogs baying. They’ve
found me. They’re close. I hear shells
rattling into rifle breaches, bolts
jamming shells into firing position.
I’m running again.
Behind me a bolt slams down,
the popping crack of a gun,
the side of the tree next to me explodes.

I run hard.
Run with all my strength.
I leap over my trail & crash into
tree cover. But the jeep is rattling,
jerking itself through underbrush behind
me.

When I hit the stream
the coldness of water tears breath from
me. I stop for a second to regain
direction. A 30 bore bullet smashes my
flank, it’s like being clipped by a
truck. I’m down, then up and running.
Over there,
I see my fields golden in the sunset,
it’s my spot. I have to try for it.
Wildly with total concentration,
I run
Over bushes, brush past trees, knock
branches down, in my thirst to escape.
I’m moving now. Flying over earth,
my mind afire with the pain in my flank.
Now breathing coming hard.
What’s this? A strange taste.
Choking. Blood in my throat.
The ground rushes toward me.
Something going down.
I’m on the ground.
Breathing blood & foam from my mouth.
More burning, body going numb.
laughter.

Someone standing next to me.
A boot rolls my head over.
Didja hit em?
Twice.
Dead?
Yeah, deader ‘an hell.

He didn’t hit me. He couldn’t have.
No.
I’m still running, still alive.
I see my spot now.
It’s here. Tall grass. That good smell.
So tall.
All the way up to my shoulders.
But I don’t remember it being
so dark. Steve De France is a widely published poet, playwright and essayist both in
America and in Great Britain. His work has appeared in literary
publications in America, England, Canada, France, Ireland, Wales,
Scotland, India, Australia, and New Zealand. He has been nominated for a
Pushcart Prize in Poetry in both 2002, 2003 & 2006. Recently, his
work has appeared in The Wallace Stevens Journal, The Mid-American
Poetry Review, Ambit, Atlantic, Clean Sheets, Poetry Bay, The Yellow
Medicine Review and The Sun. In England he won a Reader’s Award in Orbis
Magazine for his poem “Hawks.” In the United States he won the Josh
Samuels’ Annual Poetry Competition (2003) for his poem: “The Man Who
Loved Mermaids.” His play THE KILLER had it’s world premier at the
GARAGE THEATER in Long Beach, California (Sept-October 2006). He has
received the Distinguished Alumnus Award from Chapman University for his
writing. Most recently his poem “Gregor’s Wings” has been nominated
for The Best of The Net by Poetic Diversity.