On a summer morning,
I waited outside a county prison
to conduct research on the notion of freedom.
A short, bald man exited
the building, I assumed, a free man.
Turned out he was free indeed because I asked him.
“Sir,” I said, “were you just released?”
“Yeah,” answered the little man, “and who the hell wants to know?”
“Nobody,” I said, “just some guy who wants to know what it’s like
to be free.”
He chuckled, then scratched his stubbled chin.
“Is somebody picking you up?” I asked.
“No,” he answered.
“Wherever you go then,” I said, “won’t your legs tire out?
You aren’t used to walking long distance.”
The man looked at me with raccoon eyes, smiled,
then scratched his stubbled chin.
“You know how I got in there, boy?” he said. “With these legs here.
They never failed me ‘cept the once, and once is all they ever
gonna fail me.”

“But where will you go? Where will you stay?”
He squinted.
“Don’t worry about my legs, boy,” he said,
“or where I’m gonna take ‘em.
Instead, worry ‘bout this here mouth,
‘bout the words I’m gonna say, and how I’m gonna say ‘em
to people like you.”

Upon release,
some men turn left,
while the rest go the other way. 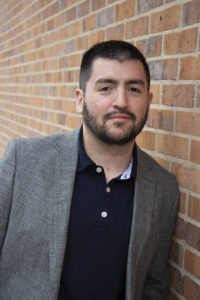 Alex Z. Salinas lives in San Antonio, Texas. He is the author of WARBLES, his debut full-length poetry collection by Hekate Publishing. He serves as poetry editor for the San Antonio Review and holds an M.A. in English Literature and Language from St. Mary’s University.