The next vape, the next corner
To turn, the next day, he drove
To Maidenrock. It was a Saturday.
Schaeffer thinks of the adjective,
Then, next, please, please added
To soften the blow that one is next,
Whether one likes it or not. Schaeffer
Thinks, I’m next. He thinks:
The next vampire film, the next
Trip to Walmart, the next bite
Of the apple, the next diver
To leap from the plane and pull
The parachute string to soften the fall.

The next vape, the next hero
The next vampire, the next banquet
The next moment, who knows
Anything might happen:
A river might flood,
A tree might catch on fire.

There’s the Rita H angle
How she was glamorous in her voice
Her eyes, her long wavy red hair
Her spangled dress that hugged her hips
Glamorous in her walk in how she moved
Back and forth on stage
Under the spotlight in Gilda.
Then, spin the wheel of time forward,
Say, twenty years and find her
Alone in a room. Dementia
Has taken over.
She is cared for, incontinent
Can’t wipe herself or wash her
Once lovely hair. Oh,
The waking nightmare bird
Perches on her shoulder
That was once bare and aflame
With lust, all of her.

Bombs turn a building to rubble,
rescuers find
an arm, a leg.

In a mall a maniac fires a rifle,
leaving in his wake
dead children.

Hate manifestos
all over the Internet,
in the world there is danger:

a racist shoots Satyajit Chandra
at a bus stop
and nothing is done.

Still, even now, beauty
is with us.

This accident from 1965 astonishes
Schaeffer. He writes: I was far away,
but I can see the broad boulevard,
the side streets of my hometown,
and can imagine the Davis car
blows thoughtless through the Stop
and slams the rear of the Edwards car

so that car spins a quick whirlwind
on this Sunday night of light traffic.
The lethal turbulence in this time
before seatbelts flings rag doll-like
Mr Edwards from behind the wheel
out to the street, his head dashes
the curb, instant dead. Mr Edwards’

going from his house to Lucille
Desaderio’s split-second stopped
on the boulevard, that two mile drive
disrupted with Lucille who sat close
between Mr Edwards and Chris
his son, both passengers still there
in the gold sedan’s front bench.

The sedan’s spinning stilled,
the turbulence quieted, still as death
that intersection. I can hear sirens,
see two patrol cars on the scene,
a yellow ambulance’s red top whirls
in the still night, a badge, his back
to the ambulance, jots with a pen

in a pad. The ambulance’s back door
open, the sheeted dead lifted in
and wonder if Lucille that night wore
shorts, sandals, a thin gold cross
on a chain and at what hour Lucille
unhooked that chain’s clasp and
wonder if a red white Marlboro box

fell from dash to floorboard, Chris’s
cigarettes. Did he reach for one
and with a Zippo light it? Its orange tip
in the dark glows as the badge jots
with a ballpoint and the ambulance
siren sounding leaves the boulevard
and Lucille and Chris leave, and John

Davis, the other driver. I remember
Mr Edwards dove perfectly off a high
board, arrow-straight down into a pool
of blue water rippled with sun rings.
Iron-gray hair, tall and straight, at 47
still athletic, he walks out a door
with car keys in hand, that night. 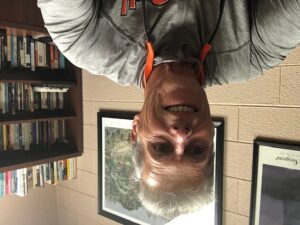 Peter Mladinic has published three books of poems: Lost in Lea, Dressed for Winter, and Falling Awake in Lovington, all with the Lea County Museum Press. He lives in Hobbs, New Mexico.