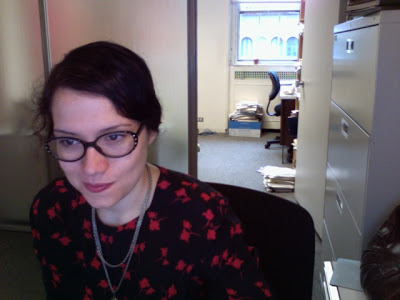 ”I am a man who loves beauty” but good design

that can’t be halved

and quartered. As if poetic diction,

as if that supremely

impersonal avant-garde could pave over, even express

The electric bill is a paper wing entering that familiar inferno, it’s December

of the neoliberal myth the bits from which it’s woven: newsprint mylar

bendy straws falling away faster than anybody. The problem with Marxist-

Leninists is they ask you

to make films for the revolution.

Handbag vendors nested in a retrospective of Takashi Murakami

from the cock of a cartoon

thousands of janus-faced spheres one side

is winsome the other is

MR. MURAKAMI, DEATH IS NO SHRINKY DINK. Let me warn you:

The mask of strangeness

always falls off the face of convention.

Laura Jaramillo is a poet from Queens. She is a PhD candidate at Duke University where she is writing her dissertation on avant-garde Latin American and Spanish film. She also works as a film and book critic for Durham’s Indyweek. Though born, raised, and most of her life planted firmly, until very recently, in the soil of Queens, New York, Laura Jaramillo considers herself at least partly Philadelphian because she came of age as a poet there, met the community of poets that continues to inspire and nurture her. As a child, she was allowed to speak only Spanish at home, because her parents feared she’d lose their native language in the new country. This prohibition started a secret love affair with English––its urgency, its directness, its beautiful iciness––in her first-generation immigrant soul.

She’s the author of two chapbooks: The Reactionary Poems (olywa press) and Civilian Nest (Love Among the Ruins Editions). Her poems have appeared in The Poker, Pocket Myths: The Odyssey, P-QUEUE, among other places. Her most recent publications include Material Girl and 29 Waters

I’d like to write really dangerous poetry, a poetry that tells the TRUTH, not truth in a journalistic sense, but in a personal sense, in a political sense, in a formal sense (and OK, so maybe in a journalistic sense sometimes too). In the wake of Sarah Palin, we poets and Americans have a renewed obligation to language and to meaning-making, to clarity, to communication. Gibberish obscures and distorts, in politics, and in poetry. The truth is an aesthetic in itself: weird and raw and funny and dark and raunchy and beautiful. The poets and poetries (and novels!) I love, which are folded intimately into who I am and what I write, all transmit their own versions of reality—not to be confused with realism— through writing. I humbly hope to do this: to write the messy collage of impressions, the tangle of stories, images, and words that are my consciousness, my reality.