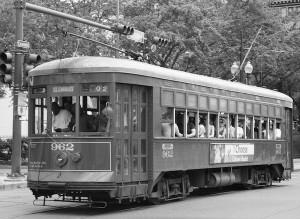 I sing a streetcar serendipity,
pralines and beignets, king cakes and pears,
a chicken pot pie from The Pie Lady,
mango, banana, Mr. Okra’s wares.
I sing of the sweet Sweet Street Symphony,
of improvised signage by Dr. Bob,
the half-folded fan of the Marigny,
be nice or get yourself a new paint-job.
I sing Jackson, I sing Congo and Pops,
jazz, blues, Dixieland, or gospel menu,
the iPhones of the rookie female cops,
the Quarter and the Faubourg; I sing you
the Gutter Punk’s hat where a quarter drops,
the boys, the girls, the creoles and the whites,
the seedy bars, the dance that never stops,
the lost blue of days, the yellow of nights.