Africa North is an excerpt from the collected poems All the Babble of the Souk. Robin Ouzman Hislop

All the babble of the Souk
men over there, over there women.

All the life of the planet
so little part of it that i breathe.

Weather beaten highlands, once passed through.

The river bed, no more like a parched bone
its late autumnal river meanders as a vein
past four reservoirs
a quest that will end in winter´s flood.

Between them are momentary mists
where brightly clad figures of the north, suddenly dim.

On the frontier’s beach taxis come, go
only the stranded remain, together with the seagulls
four men huddled, drenched in pouring rain
dead once more, again, all pathways home
washed away, again. A broken song

Remember me, sung in a doorway
brings the world at large together
as suddenly as it narrows.

as the brush strokes of my mind steal the action of the shadow.

Ancient fields’ still colours surrounded
by burgeoning new lead to the valley below.

Old women, old as aglow, so slow they go
poised aloof in an untouchable world, trapped.

High in kiln firelight they cowl night’s shade
to oversee goats on the hill beneath.

Daughters of necessity naked in the rock
unleashed in white trefoil in the marsh
swamp of night rain, stark where epochs
sleep in their shadows.

Replication of memories, where the old
becomes the new, a world splits in two
with Morpheus in the breach.

Beyond control, beyond reach the erratic butterfly
flits bloom to bloom, the intrepid stalker with net
both captured in the mimic mould.

A knot is tied, a knot that wrestles
embraces, that ravels birth
unravels death & binds its existence.

Her face is as if a moon glazed over
with a less serene ceramic dust that in the end
after its perplexity contains its surety.

She draws her forefinger laterally across
under her eye lid in a smear
nor can you change the image of what you are
in the pupil of her eye.

Faces in the rain thin
weakness of watery years.

A winnowing canvass tosses corn
as fireflies in the blazing day.

The hag in her rags begs her bag
holding all shadows to account.

You sit in the solitary corner
at the empty dice board
to throw, as the music swells, as strings play.

On the washing line clothes of all shapes
sizes are waiting to be filled
suspended between earth, sky, where white sheets blow.

A twinge of nostalgia flashes
a link between a fluttering curtain
an open window frame, a sun shadow game
a flickering apparition pattern leaving only – strands.

A breeze flutters an open foolscap on the table
as though a phantom reader
should flick with regard through a score of notes
then stops at the first blank white sheets
stays, the moving hand that wrote, wrote no more.

On record, old honky-tonk goes on
amidst the heaps of consumer city sneakers
in the same dust where faces
turn from their spring red lustre to a sun soiled wear

Through a beehive of alleys
names, aye to fetch them home again
as if where the countless dead resided, you’d said
in a market of women shrouded in shawls.

Berlin falls, Baghdad falls
all the years turn to further tears
further fears to merge with your voyage
the shape of dreams to come
to be only endearments of what has gone before.

A flower opens after a thousand years in a shell of tears
indifferent to its beholders’ sight
who paint it with the colours from the waters of their night
on an unknown shore, to whose sight it opened once before.

In an internet cafe, an Arab girl discrete in headdress
plays with cartoon molecules of Mickey Mouse
Koala bear

nubile women’s faces dream of nudity in their shrouds.

Wonky pinz nez specs, jumble sale clothes
bad teeth, unshaven grin
looking a faded duplicate of a down
out James Joyce with the come on
are you Irish, he asks
perhaps he was once upon a time.

They came through the cleft of the mountain
– where the river ran
to swim as a blur in the naked purple of the eye.

On the mountain face there is a scar
once a sacred place, now extinct, as they are.

Yet wild still she runs, amidst the sheep, goats
toils at the hearth, dutifully bears children
yesterday she knows but not tomorrow
where she hides her sorrow.

Even as he ploughs the hillside
a photo will steal his soul, but his beasts will do.

By day the olive tree green in the blue sky of the window
seems almost immortal enriched with the blood
it’s enriched, now at its roots.

Costa de la playa, white beehives in the sun, all money, no honey.

In the broken lights of the bazaar
the dusky eyes of the beggar sunk in their sockets
maze in crooked cul de sacs embargo amidst
the furls of silk that foil the flickering lantern niche.

In the gloaming a solitary reaper reaps its shadow.

Streets packs ravage carcasses
at dawn, the city wakes to the city’s obedience
to obey its disappearing shadows.

A ghost city of watchers
watched as shadows by a memory that has outlived them
now fragments in an admixture of old, new
amidst a junk yard of rubble

The street’s mechanics of the day
obey their limits, patterns of parts
where we end only to start in a series of nows.

Post mortem of the world at large
an autopsy of ghosts on the slab.

Born to see, in the boutiques people seem
like their own mannequins
existence is a mystery with no purpose

only we endow it with a destiny, it does not seek from us. 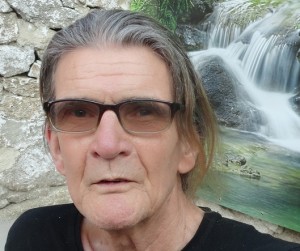 Robin Ouzman Hislop
is on line Editor at Motherbird.com, Artvilla.com & Poetry Life & Times, his recent publications include Voices without Borders Volume 1 (USA), Cold Mountain Review (Appalachian University, N.Carolina), The Poetic Bond Volumes, Phoenix Rising from the Ashes (an international anthology of sonnets) and The Honest Ulsterman.
His last publications are a volume of collected poems All the Babble of the Souk & Key of Mist, a translation from Spanish of the poems by the Spanish poetess Guadalupe Grande, both are published by Aquillrelle.com and available at all main online tributaries. For further information about these publications with reviews and comments see Author Robin..