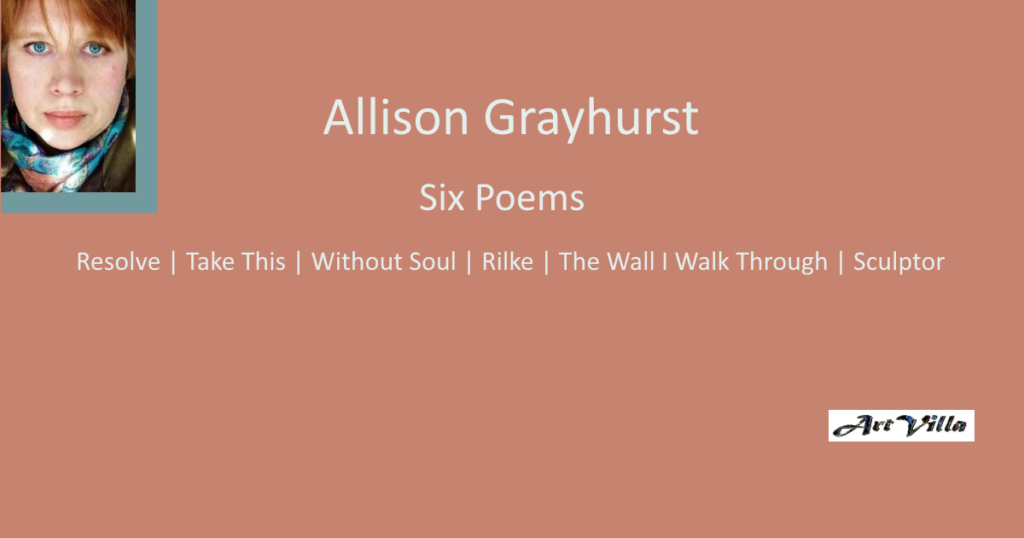 Burning in the middle
where the sickness gets in,
and my expression is foiled
by an inaudible aim.
Clouded like a bad fragrance
soaking into the pours, making it hard
to breathe. Hard to breathe in like
a petal crushed into a ball, or like a poem
with no testimony.
But I will not be taken in.
I will forge a path for my energy,
find new neighbours, something
unbroken to hold on to.

Greed. Grief.
Screaming in the vacant aftermath
where such a scream contains, then releases
the toxins, separates the truth from the immobilizing
confusion of evil.
A smoke cloud of charred pride.
The lie of worry, the torn pages
of prophecy laid out,
caught by the wind, carried
toward God as this scream is
carried – a boxed burden
waved high
into a dull sky.

I felt the pressure between
my hands, drive through
my cortex and embrace
the tip of my brain with warmth.
It felt like fool’s gold, fake
but still providing glitter.
I felt twisted with unknowing,
degutted of all things I hold sacred.
And that was a coat over my corpse,
pennies placed over my eyes. That was
for me, forging forward
with no significance, with no discernable
regrets.

You have given me
a stoic ideal and also
the comfort of knowing of the deepest dreamer’s fragility.
You – in the rain,
running with your rage, disappointment and poverty
until you reached the angels and the animals
who spoke to your uncertain heart and spilled
their clarity into you, into words for you that formed
like a reprieve from the monsters and the
chaos of failure. They held you in their
Sabbath for a moment of prayer, until
thrust again into your anguished wilderness, you sunk
away from joy, leaving behind an imprint of happening –
engrained in the realm of all else that ripples
intangible, eternal.

The Wall I Walk Through

Sophistication underneath
a set of sad droopy eyes.
The bland dream of civilization
slicing my fingers
as though my flesh was a watermelon.

I see no point but the point
of love, and the interaction between two
in love or just loving.
I see that a relationship can only happen
when both parties are giving –
all else is just in process
of passing.

So hard & regal
are the cry of your creations.
A sadness that moves
to be opened:

Stone stuck
movement. Watchers
in the distance
breathing out
your madness.

Old like
love, your roots
have no end. They burrow
with a strength no god
could hinder.

Your hands
outstretched
to the foreign dancer:

shrewd as passion,
life-filled
as the sea.

Allison Grayhurst is a member of the League of Canadian Poets. Three of her poems have been nominated for Sundress Publications “Best of the Net” 2015, and she has over 1050 poems published in more than 425 international journals and anthologies. Her book Somewhere Falling was published by Beach Holme Publishers, a Porcepic Book, in Vancouver in 1995. Since then she has published twelve other books of poetry and seven collections with Edge Unlimited Publishing. Prior to the publication of Somewhere Falling she had a poetry book published, Common Dream, and four chapbooks published by The Plowman. Her poetry chapbook The River is Blind was published by Ottawa publisher above/ground press December 2012. In 2014 her chapbook Surrogate Dharma was published by Kind of a Hurricane Press, Barometric Pressures Author Series. In 2015, her book No Raft – No Ocean was published by Scars Publications. More recently, her book Make the Wind was published in 2016 by Scars Publications. As well, her book Trial and Witness – selected poems, was published in 2016 by Creative Talents Unleashed (CTU Publishing Group). She is a vegan. She lives in Toronto with her family. She also sculpts, working with clay; www.allisongrayhurst.com