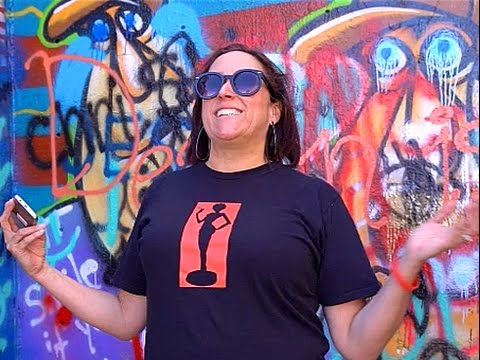 In continuing with the tradition of the annual meetings of the Poetry Comb (started on the last Sunday of April in Chicago), Janet Kuypers decided to go sponsor Austin’s 2017 Poetry Bomb at Graffiti Wall at Castle Hill outdoors for her Austin, TX installment of this annual Chicago poetry tradition on April 30rd, 2017, starting at 3:30 in the afternoon. She invited people to got together to read poetry at a place that is not an open mic, to just share poetry with passers-by — and people did go there to join her to read poetry — but they never found each other in the vast outdoors space! Either way, Janet Kuypers did read a number of her short poems (all poems she had either never read before, or only read once in public, so they were not well-known poems) when she decided to “Drop the Bomb” — the poetry bomb, that is. (And it is funny that John chose to facebook live stream some of her reading, because that is the only way we found that some people went to Graffiti Park, and we happened to miss each other)

Before the show started she also released a chapbook of all of the short poems she held slated to read (and she read all of them expect the last poem in the chapbook), and this chapbook “Drop the Bomb” is still available online even during her reading, so anyone could (and can) download, or view online for free, the chapbook titled “Drop the Bomb” as a PDF file for free any time.