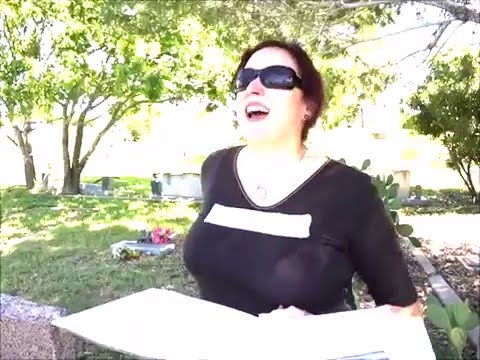 Located at Bagdad Cemetery in Leander Texas (since Janet Kuypers moved from Chicago Illinois since the past Poetry Bomb) Janet Kuypers read poetry with two different themes (because of two different weather patterns), because the annual Poetry Bomb is an effort to get poetry out in public — too often writers read their work at poetry open mics and features, but things poetic can be seen everywhere in the world… This is why in this repeating annual venture, poets go out somewhere where people usually don’ read poetry, to perform it for people that are otherwise going about other business).

After making the decision to read poetry at a place where some of the movie The Texas Chainsaw Massacre was filmed (and yes, people did come the cemetery while she was there), Janet Kuypers read two sets of different styles of poems (in honor of the weather change during the 2016 Poetry Bomb). In the first part of the readings (while the weather was still sunny), she read only a few pieces relating to death, but then switched it up to shorter more novel pieces of never-before-read poetry. In the second (longer) set of readings (once the weather turned overcast, how fitting for hanging out at a cemetery), she read mostly never-before-read poems about her mother’s death, and ended the longer set with a poem or two she wrote just after she was almost killed.

After the reading (because no one knew with the weather how much poetry could be performed), Kuypers also released (via Scars Publications, as a supplement release to cc&d magazine) a chapbook of an online PDF file of the poems she performed (in the order of their performance) the day of the event of the 2016 Poetry Bomb at Bagdad Cemetery (available as a free download any time).
Writings included in this show (in the order performed):
Dreams 1/28/07 (Seeing mom)
There Are Too Many Poems About You, David
Why Am I Infected
Koi Ponds and Concrete
Golfing with George Eastman
Suing NASA For Comet Play
Jog Hurt
on a bike
untitled 6/11/15
Superficial
The Sky Is Always Blue
hard of hearing
probably not
Saving Myself
a Happy Ending to Everything
I’ll Push the Cart
My Memorials to You
Rings like Gravestones
This is What you Leave Me
We’re Trying
Letting Time Tick By
Ingrained in Your Head
Wanting to Touch a Corpse
More Painful to Experience
Mother’s Day Flowers Forever
It’s Just Not Right
Janet Spinoto, Mother of 3
No Place
Princess Diana, One Year Later<
Driving Car Into Ditch
Take It All Away
Think About It Much
existence