Spirit Heroes on the Wall

before I met him

Do I know you

I feel as though I

or so they say

back into the mists.

If once I knew you

I was brave enough

to be your friend. 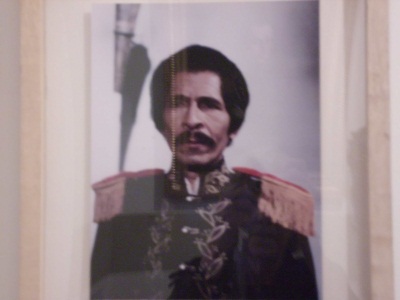 Juan Jose Rondon, is the guys name, the one who I THINK the picture is of.  I googled him and everything is in Spanish, but I THINK he was in a calvary, for the rebels (Bolivar, trying to get rid of Spain).  He’d originally been Venezuelan, son of slaves, and joined the Spanish army, but didn’t like the Spanish, thought they were cruel, so he took off and joined the rebels in Colombia.  Anyway, Bolivar was losing a big battle, and all would be lost, when Juan Jose said, why haven’t you asked us to help?  and Bolivar said, “Go then, and save the country!”  So Juan Jose yelled “Those who are brave, follow me!”  and 9 guys followed him, and they won, and saved the day for the good guys.  I think before the battle, he and his friends were taking care of the horses or something.