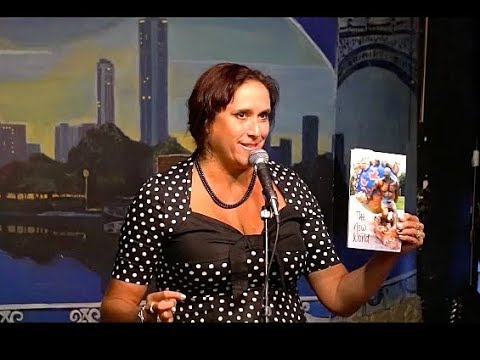 Chicago poet and Austin resident Janet Kuypers returned to Chicago for a week in August to coincide with the August 21st total eclipse of the sun (where she traveled to southern Illinois to photograph the event). During her stay she was honored with the opportunity to guest host the open mic she rand for over half of a decade in Chicago (then titled “the Café” at the Gallery Cabaret) as well as perform her feature show “This Just In” for Poetry at The Gallery Cabaret (2020 N. Oakley Ave. in Chicago – one block east of Western Avenue and one block north of Armitage) Tuesday, August 22nd 2017.

Because Janet Kuypers knew she was coming back to Chicago the week of the total eclipse of the sun (and because she had no book releases of her poetry for years, ever since she moved TO Austin), Janet Kuypers was thrilled that Scars Publications was able to release the first printing (from a U.S. printer) of two new books of hers, of poetry she had written while living in Austin, “(pheromemes) 2015-2017 poems” and “(pheromemes) 2015-2017 show poems” (the second book of poems she wrote for features she has had in Austin). Since her return from this trip, Scars Publications has also released the second printing of “(pheromemes) 2015-2017 poems” and “(pheromemes) 2015-2017 show poems” (from an Amazon affiliated printer, with sales from printers in the U.S., the U.K., all of Europe, and also Japan). Everything she read in her show was from these two books, and she also sold proof copies to audience members after the show.

Read the poems from the feature “This Just In” (as well as poems performed during the open mic before the feature):

“Knew I Had to be Ready”
“Ultimate Connectivity: Getting Naked with Nature”
“X-rays and Broken Hearts”