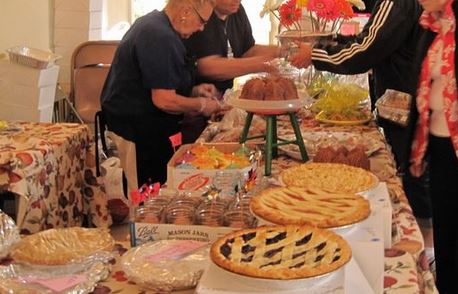 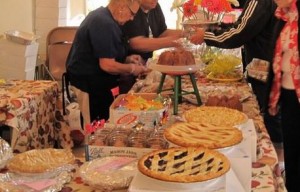 Gertrude Will Not Go Quietly Into That Good Night

Gertrude T. Suggs was a hard case. She had all the edges her name suggests. A widow and a pillar of the Mt. Ida Methodist Church, she could quote scripture at length and frequently did. The other dowdy ladies who worked at the baked sales and ham suppers deferred to her. Her frown made lesser women quake. To disagree with Gertrude was risking cold smiles and withering, knowing looks. Gertrude was the chair of every committee, the tireless worker at every garage sale. She was a member of the choir. She could not carry a tune and her voice grated on the nerves but in the Mt. Ida Methodist Church volume took precedence over any other musical requirement. The musical director, like everybody else, did not want to incur the undying enmity of the omnipresent Gertrude. Every Sunday, she was there in the loft, beating the congregation about the ears with psalms about marching soldiers and rugged crosses. She would amplify any indiscretion by any of the congregation in thinly veiled diatribes against “whited sepulchers” and “wolves in sheep’s clothing”. Gertrude T. Suggs was, in short, the type of person who did all the rights things for all the wrong reasons. Her Christianity was one of acts, not feelings. Her life was an antisacrement in which outward and visible signs were the antithesis of inward and spiritual acts.
Her marriage had been brief and childless. Thomas Suggs was a colorless man who stood silently in Gertrude’s shadow for a few years and then died when his press at the Ilium Machine Works caught his sleeve and indelibly stamped him into the organic equivalent of a t-bar. Gertrude wore black for a month and then settled quickly into the routines of the pious widow. The Machine Works pension plan was not generous and Gertrude took a succession of foster-care children into her narrow flat over the years. She turned many of them into unrepentant atheists with her constant bullying but the house was clean and the meals nourishing. Gertrude looked down on other ladies who were not as committed to good works. She made ends meet.

Elizabeth was the last of the foster children. She was placed by the agency when only nine. A pale, thin girl with an unexplained scar at her throat, Elizabeth seemed to thrive where other children had shrunk into themselves with Gertrude’s harsh ministrations. She meekly followed her benefactress to every church function and her shy smile was a counterpoint to Gertrude’s constant chill.

Over the years Elizabeth became a favorite of the congregation with a kind word for everyone and a demure attitude that was somewhat at odds with her budding womanhood and obvious good health. Elizabeth wore simple dresses that covered her throat and was a good but not gifted student. The ladies at Mt. Ida Methodist Church watched Elizabeth closely as she matured. They hoped for and expected the girl to inevitably rebel against Gertrude’s mean and narrow attitudes. They all hoped Elizabeth would realize the wider happiness that seemed to be her potential. For some it was a desire to live vicariously through the young woman. For all it was the long-deferred dream of seeing Gertrude punished for her supercilious ways.

Elizabeth dashed their hopes for a “comeuppance” of Gertrude. Even after graduation from high school and the end of foster care supervision she stayed with the Widow Suggs. A job at the local pharmacy was not well paid but compensated for the loss to the small household of the foster agency stipend. Elizabeth gave every penny to Gertrude who received the slim pay packet with an imperious air but without gratitude. Elizabeth also began night classes at the community college. Eventually the women of the congregation gave up their hopes of a repudiation of Gertrude.

The years passed and Gertrude grew more irascible with age. Her judgment of others foibles became more harsh. Her condemnation of any frivolity grew more strenuous. The conviction in her own piety and moral superiority became even more smugly assured. Elizabeth never wavered though in her devotion to the old woman. She seemed to not notice the slights, the condescending comments, and the constant disapproval that Gertrude radiated.

Gertrude retained her regal bearing but her strength waned with passing time. The younger member of the household slowly assumed all the cleaning, cooking and other duties but Gertrude never relinquished her role or attitudes as benefactress and mistress to be obeyed. The ladies of the church began to speculate about why Elizabeth never had friends or male admirers and they agreed the spirit of the young woman had been crushed by the years of deferring to Gertrude. “A young thing like that with that old biddy,” they clucked. “She should move out of there and find herself a good husband.” But Elizabeth stayed and no unkind word about Gertrude or complaint about her station in life was ever heard.

One fine May Sunday morning Betty Carson, who worked at Dr. Keene’s office, brought news to the afternoon pancake supper that electrified the ladies as they served coffee and cleared tables. “I saw the file myself,” Betty said. “Gertrude Suggs has cancer! ”

Diagnosed with cancer. Perhaps some thought that cancer, with its unrestrained antipathy to all that is natural and good, was a fitting disease for a woman as negative as Gertrude. Such an unkind and unchristian thought would never be voiced at Mt. Ida Methodist Church of course. People treated Gertrude with a saccharin and overbearing kindness that soon let the Widow Suggs know her cross, which she had meant to bear silently and stoically, had become church property. She immediately ended all her association with the institution that had been at the center of her life. She quit every committee and never came to Sunday services again. The ladies ascribed this surprising development to the vicissitudes of dealing with a terminal disease but Gertrude was simply unable to admit even a physical failing to anyone. The Widow Suggs retreated into an even more narrow existence. Her life became bounded by visits to the hospital for her chemotherapy and her bed at home where she lay exhausted by that regime. Even as her body failed Gertrude never softened. She continued to harry and order Elizabeth about. Elizabeth responded with even more gentle care and respect than she had accorded Gertrude in health.

The dissolution of Gertrude was rapid. It was as if, after years of keeping everything at bay, her compromised system was exhausted. A crack had appeared in the monolith and chaos was afoot. Elizabeth quit her job and cared night and day for the dying woman. Gertrude became completely bed-ridden and dependent upon Elizabeth but it was not reflected in their relationship. Gertrude rewarded her nurse with vituperation and constant denigration. Elizabeth bathed the wasted limbs while Gertrude heaped insults on the young woman. Gertrude railed at Elizabeth even as she emptied the bedpan or gently moved the cancer victim to change the sheets. Gertrude would use what little strength was left to push away the spoon that Elizabeth held to the pursed lips. Every kindness was repaid with anger. Each gentle act was rebuffed with callous disregard. Gertrude and Elizabeth were both locked in the roles the universe had assigned them. The imminent death of the torturer seemed to spur both her and the caregiver to the quintessential essence of their being and the most extravagant display of those disparate natures.

One night in late September Elizabeth knew the end was near. Gertrude’s breathing was ragged and the shrunken frame glistened with fever. Elizabeth gently bathed the febrile limbs and tried to comfort the Widow Suggs with her presence. The hours passed. A small moan escaped unbidden from Gertrude’s lips. Elizabeth leaned over her, to once more plump the pillow and utter a kind word. Gertrude drew all her strength into a last breath in order to curse the young woman one more time. The deprecation was never uttered. Where Gertrude had intended a mean word there was a bright flower. Elizabeth looked in wonder as the tendrils flowed from Gertrude’s slack lips. The plant of glossy leaves and gentle fragrance entwined the desiccated body and lifted it off the bed. Elizabeth drew back, not in fear, but in awe. Elizabeth never saw the dark stranger enter the room or the sharp scythe he carried to cut the towering green plant.