A FISH OUT OF WATER

My Father always wanted to be an astronomer. When I was a child we had a telescope and on weekends we would prop the scope on a small hill Dad would tell me to look through the lens. I could see the moon and even the bright red spot of Jupiter. I also thought the moon followed me as I walked around the side of the house. But my brother told me that the moon didn’t exist simply to follow me. Then he would bray as a donkey
I think Dad day-dreamed most of the time. He wanted to live, flying amongst the stars of the universe and gliding along the back-bone of the Milk-Way. Instead, he worked on the Post Road in Milford in an office full of metal desks with phones that seemed to ring at the same time. The glare from the windows flashed off Formica surfaces that had deep scars from pencils and compass points. It was sort of a real-life Edward Hopper office.
But my Father never seemed to keep a job too long. It didn’t bother him, though. He would come home from work and make his pronouncement at the dinner table. Always prefacing his ‘out of work’ speech, with “I’m just a fish out of water. Just a fish out of water, ahead of its time.”
Mum would look at the floor, realizing she would have to put in more hours and continue to drive to work in a car that had a front seat that ended in the rear, if you stopped too fast. My brother and I loved that old Plymouth , with its oversized rear fins and gun-metal finish. It had push button controls, no heat, and my Mum always mumbled that my Dad got the better car, while she was stuck driving a g.d. bucket of bolts.
Sure, my Father always landed another job, but he was just floundering. He’d complain about all the bosses who were jerks, the day was too long, and the Union was stupid. Yadda, yadda, yadda. We had heard it all, a million times before. But I always wondered, when we heard ‘the speech’, how a fish out of water was ahead of its time. It just seemed weird.
When Dad was in his fifties he contracted colon cancer. He let it become so severe, he said he’d missed his exit at work due to delirium. Mum just looked at the floor and my brother and I got used to the typewriter plinking at night while Dad re-worked his resume.
The next day an ambulance raced him to the hospital and we all followed in the old Plymouth with the faulty seats. My brother sereptitiously checked the ashtrays for cigarette butts as I stared at storm clouds.
After the operation Dad sat in bed propped by a few pillows. Serpentine tubes wound round his arm, connected to a metal contraption he could walk with. . .but he didn’t want to walk. He wanted to talk about the planets and black stars and the red spot of Jupiter. There were novas and super-novas and black holes and white holes. He said there were parallel universes and things we couldn’t even imagine. He flailed his arms as he spoke and the tubes jumped as transparent snakes. My brother thought he was high on hospital drugs and proceeded to walk down the hallway. But I could tell Dad was reveling in his time away from the phones that rang at once in the Edward Hopper office on the Post Road in Milford , and all the other places where he was always a fish out of water, ahead of his time.
Mum loaded us into the car. It wouldn’t start the first few times, but eventually it turned over and back-fired. Yeap, it sounded perfectly fine to us. I turned to my brother and said, “What the heck is a fish out of water, ahead of its time?”
He looked at me and brayed as a mule. That was the kind of laugh he had. You know, like a mule with sleep apnea. Then he leaned near me, “Dad’s a nut-case. You are too. Remember your friend from grammar school that wouldn’t hang with you then, but now she’s your big old buddie?”
“Yeah. What’s wrong with Kathleen?”
“She says junk like, oh, you’re just ahead of your time, Joanie. You’re just ahead of your time. Jeez, that’s such a load of bull.”
I looked out the window, sort of glad in knowing I had something in common with My father. I also longed to live amongst the stars of the universe and glide along the back-bone of the Milky Way.
But I didn’t know if I wanted to be ‘that fish out of water, ahead of its time.’ 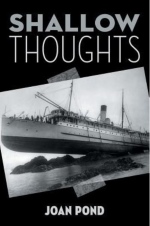