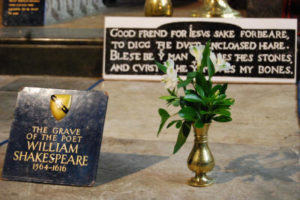 The tomb of the bard, son of glove maker John Shakespeare, lies in the Chancel of the Holy Trinity Church on the banks of the River Avon, together with the epitaph, supposedly written by him, William Shakespeare 1564 – 1616. Good friend, for Jesus’s sake forebeare /To digg the dust enclosed heare/ Bleste be the man who spares thes stones/ And curst be he that moves my bones, which seems to have acted as a sufficient deterrent for those who might want to know a little bit more about how he died. One on going theory is it was through a contracted fever after a drinking bout with his old chums Ben Johnson and Michael Drayton. If you happened to see A Waste of Shame with Rupert Graves playing the young (and finally older) Shakespeare, you might be persuaded it was through syphilis. If so, it seems unlikely the epitaph was intended as the kindly advice of the poet to whomsoever. Apparently in those days epitaphs of the sort were quite commonplace and in our Bill’s case may well have been to avoid having his bones dug up to create more burial space. He had after all secured a place in the Chancel from the Charnel House in the south grounds, the haunt of grave diggers, through his capacity as a lay rector of the parish, a tithe which cost him £440, not to be sniffed at in those days, and not from his abilities as England’s fabled poet and playwright for the sake of history ever afterwards.

It’s well known enigma surrounds the works credited to his name – how could a working class Warwickshire lad, a son of a glover with a mere paltry grammar school education in Latin and Greek come to write such erudite masterpieces of literature. The point is our Bill was very talented, he was not only a poet and playwright, but an actor, director and most important of all the theatre business manager of the illustrious Globe Theatre in London. Our Bill hobnobbed with the best in town, artists, aristocrats and even royalty. There have been many recent efforts in computer studies to try and trace out the origins in his works. One that appeals to me, rather than proposals of possible other candidates for authorship, is a study where they locate in the entirety of the texts, the manifest styles of different well known writers of the period. My own feeling is that this makes quite a lot of sense, as Bill was a very busy guy. Mostly in those days you were commissioned to produce a work and the Globe operated as a kind of repertory company putting on one play after another. He would have had his hands full, what would be more likely than having got a commission, you draft up an outline together with a set of instructions for the scenes and acts and hand them out to a body of writers you’re in cahoots with. When the ghost writings are returned and paid off with a standard fee, all the material is compiled into one working piece, whilst the different character parts are bundled out for the actors to perform. And so the play is more or less developed, written and rewritten even up to the dress rehearsal.

Hard work but they had to survive and our Bill seems to have been very successful at it, enough to amass some considerable fortune enabling him to retire at the age of 50 to his large and commodious country house in Stratford on Avon. Even if he was worn out from drink, syphilis and a great deal of overwork, 50 in those days in London, where 35 was the average age expectancy with plague and all manner of diseases rampant, was good. And at least if he didn’t leave us his bones to dig up, he certainly did with his pipes 24 of which were found buried in his garden imbued with cannabis resin, a habit which had been going on for some centuries in Ye Olde England. And so our Bill disappears into the myth and illusions that the entropy of history shapes, leaving of his likeness only bones, to all intents and purposes washed away from beneath their stones by the floods of the river Avon, pipes, a much retouched memorial bust first erected in 1623, but exhibiting, it is said, a bona fide sun tan and a portrait, by one painter John Taylor, known as the Chardon portrait. Our Bill is about 46 in this painting, which credited as an authentic representation of his image, another painting known as the Cobbe portrait, shows a very handsome young man some 20 years earlier, so if this is indeed our Bill, he did quite a bit of ageing between them. Perhaps it is fitting then to close here with words from Mathew Arnold’s Dover Beach, which are rather Shakespearean, after all.

Ah, love, let us be true
To one another! for the world, which seems
To lie before us like a land of dreams,
So various, so beautiful, so new,
Hath really neither joy, nor love, nor light,
Nor certitude, nor peace, nor help for pain;
And we are here as on a darkling plain
Swept with confused alarms of struggle and flight,
Where ignorant armies clash by night. 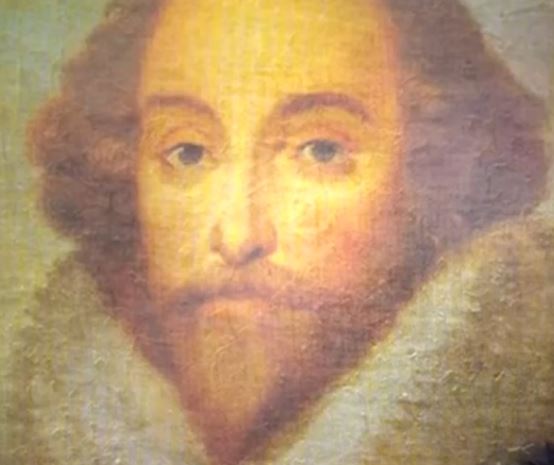 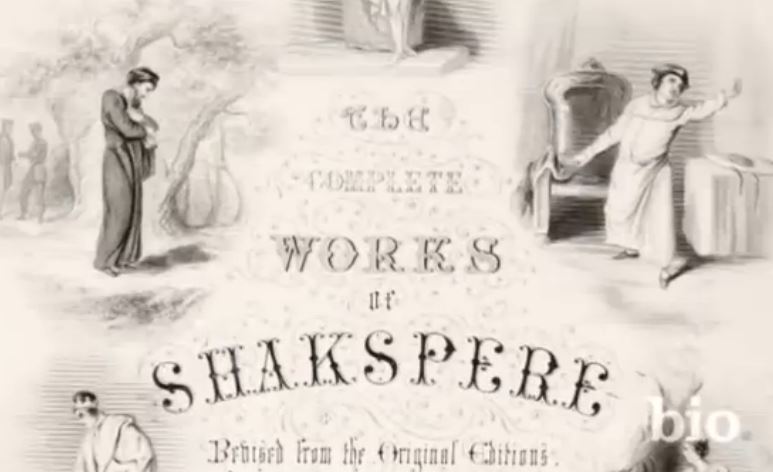