that you should fall

to ruin
to colossal wreck.

Your God’s cruel laughter
ruler of havoc, chaos, destruction
that final mockery
you knew too well
to shelter from
city of magic, bathed in blood.

when they came with their plague, their lust
to tread your sacred warrior
blood matted hair, immersed in feculence
en plein air of unassuaged sacrifice, into dust
not a death of feathers & flowers.

As you tossed your hapless
victim’s corpse, gouged heart devoured
on the sacrificial stone slab, down
the great pyramid steps to the suffering poor beneath.

Your captive, who was your self
whose steps you’d rehearsed, unto their final agony.

Whose flesh, prohibitive for you, you must share
in scattered pieces on the base maize porridge
in your neighbours’ clean kept homes

but not to the wretched poor

the phantom watchers, who must only crave for more.

that you thought of tomorrow
that it belonged to the deed
what it was to be human.

Not so, your new world order conquerors
who raised to the ground & levelled all before them
until nothing remained.

Your conquerors, who thought only of tomorrow.

Tenochtitlan, great lake city that for two centuries was the capital of the Atzec empire, built by the warring Mexica tribes of the Atzec peoples & destroyed by the Spanish conquistador Hernan Cortes in 1519. 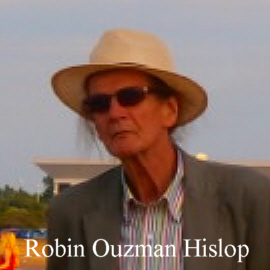 Robin Ouzman Hislop, born UK, graduate in philosophy & religions, has travelled extensively throughout his lifetime but now lives in semi- retirement as a TEFL teacher and translator in Spain.

Robin was editor of the 12 year running on-line monthly poetry journal Poetry Life and Times. In 2013 he joined with Dave Jackson as co-editor at Artvilla.com, where he presently edits Poetry Life & Times.

He’s been previously published in a variety of international magazines, which include Voices without Borders Volume 1 (USA), Cold Mountain Review (Appalachian University, N. Carolina), The Poetic Bond Volumes (thepoeticbond.com) and Phoenix Rising from the Ashes an international Anthology of Sonnets. His recent publication of collected poems All the Babble of the Souk published Aquillrelle.com is also available at Lulu.com & Amazon.com.