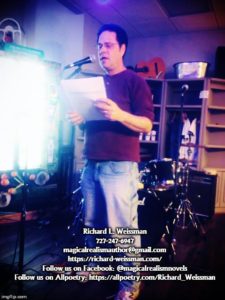 Richard L Weissman has written fiction since 1987.
In 2000, his theatrical play, “The Healing” was selected by Abdingdon Theatre for a staged reading Off-Broadway.
Richard is the author of two Wiley Trading titles. His second book, Trade Like a Casino was selected as a Finalist for the 2012 Technical Analyst Book of the Year Award.

In 2016, Mr. Weissman completed his historical novel in the tradition of magical realism, “Generations”.

In 2020 his poem, “Mountain Bird and Loquat” was selected as the grand prize winner of the Florida Loquat Literary Festival.

In addition to hosting, “In Our Craft or Sullen Art” – a biweekly poetry radio talk show, Richard participates in live spoken word events throughout the U.S. https://richard-weissman.com/
on Facebook: @magicalrealismnovels