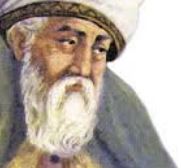 Rumi, was a 13th-century Persian poet, jurist, theologian, and Sufi mystic.
From Peacefulrivers

Born in what is present day Afghanistan in 1207, he produced his master work the Masnawi which consists of over 60,000 poems before he died in 1273. The best way to fully say in words his impact, is that he has the ability to describe the Indescribable, Ineffable– God.

Rumi moved to Turkey to avoid Ghengis Khan and lived in Turkey most of his life. His pivotal work The Works of Shams Tabriz, is considered a masterpieces and one of the greatest works of Persian literature.

There is very little difference
between a song and a poem,
between a poem and a story,
between a story and a prayer.”