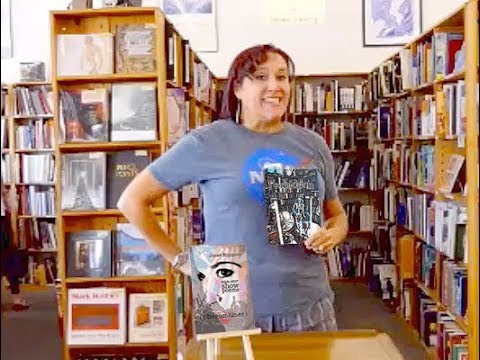 October 4th marked a October 2017 Book Release Reading of new books from Scars Publications, which saw the release of the books “Forbidden” from cc&d magazine and “a Finch in the Window” from Down in the Dirt magazine. In this reading event with multiple readings, Janet Kuypers read performance art poetry material from both of these books, in additional to an extra haiku from “Forbidden” and two additional poems from “a Finch in the Window”.

Janet Kuypers also read material from her 2017 book release “(pheromemes) 2015-2017 poems” as the finale to the Community Poetry @ Half Price Books reading in Austin.

Janet Kuypers writings read from the cc&d 10/17 “Forbidden”:
Erasure Poems…
“the Meaning of Art”
“Corner Stone Against Slavery”
“a Declaration of Female Freedom”
“One of the Most Hated Women in America”
“a Poetic History”
her haiku “unbounded”

Janet Kuypers writings read from Down in the Dirt’s book “a Finch in the Window”:
“origin, from the macro to the micro”
“violence and peace both work”
“Masquerade&#8221
“Curium”
“This Halloween”
“This Halloween Again”
“Salesman”

visit http://scars.tv/av/20171004October2017
Book_Release_readings_at_Half_Price_Books for a full listing of not only these videosm but also a series of images from this live reading.