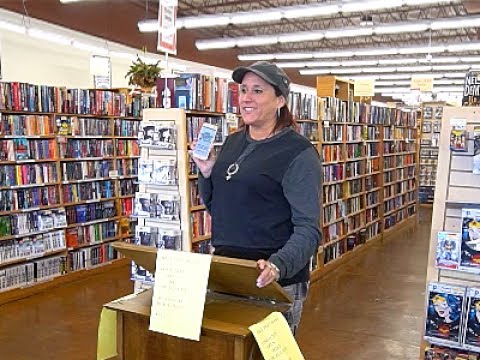 June 7rd marked a book release reading of new books from Scars Publications, which saw the release of the books &“Respect Our Existence or Expect Our Resistance” 24-year anniversary issue from cc&d magazine and “Embracing Shadows” from Down in the Dirt magazine. So Janet Kuypers was asked on June 7th to read material from these new books plus additional new 2017 collection books from cc&d’s “Things Found in Books” and Down in the Dirt’s “Study in Black” in the Community Poetry reading at Half Price Books in Austin.

As an added bonus, Janet Kuypers was asked to give two additional impromptu poetry book readings, so she read poetry both from her 2015 poetry/photo/journal book “Bon Voyage!’ (which included her poems “Everything was Alive and Dying” and “On a High Horse Like This”) as well as elements poetry (chosen and read on request) from “the Periodic Table of Poetry” (a book 3 years in the making, where Janet Kuypers wrote poems for every element in the Periodic Table – as well as bonus poems and poems about a select few compounds, where she read “Neon”, “Nickel”, “Arsenic and Syphilis” and the requested poem “Molybdenum”).